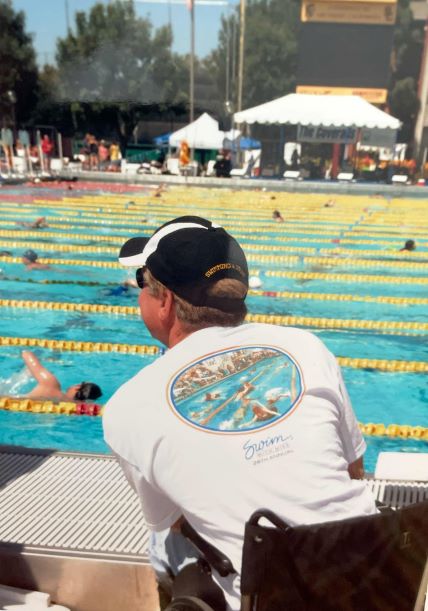 What started as a drop became a ripple and then a wave, a nationwide wave, spanning over 40 years. Navigate through the years to explore the highlights of the Swim With Mike story.

Dive into the History of Swim with Mike

On January 2, 1981, Mike Nyeholt is involved in a motorcycle accident and is paralyzed from the chest down. After four months of rehabilitation, Mike makes a surprise appearance at the first Swim For Mike. Childhood friend and USC All-American swimming teammate Ron Orr rallies fellow swimmers and the Trojan Family to raise money for a specially equipped van for Mike to continue his studies at USC, raising $58,000. Mike is so grateful for the unwavering support that he pledges to pay it forward. He commits to swimming in the next event in 1982 to raise scholarship money for other physically challenged athletes. The Ripple Effect begins.

In honor of Mike Nyeholt’s first swim, the 1982 event becomes the second annual Swim With Mike. Co-founders Mike and Ron have a vision to continue fundraising, offering scholarships for physically challenged athletes. Becki McCafferty, an All-American swimmer at UCLA, becomes paralyzed from a body-surfing accident. She is awarded the first Swim With Mike scholarship to pursue graduate studies at USC. 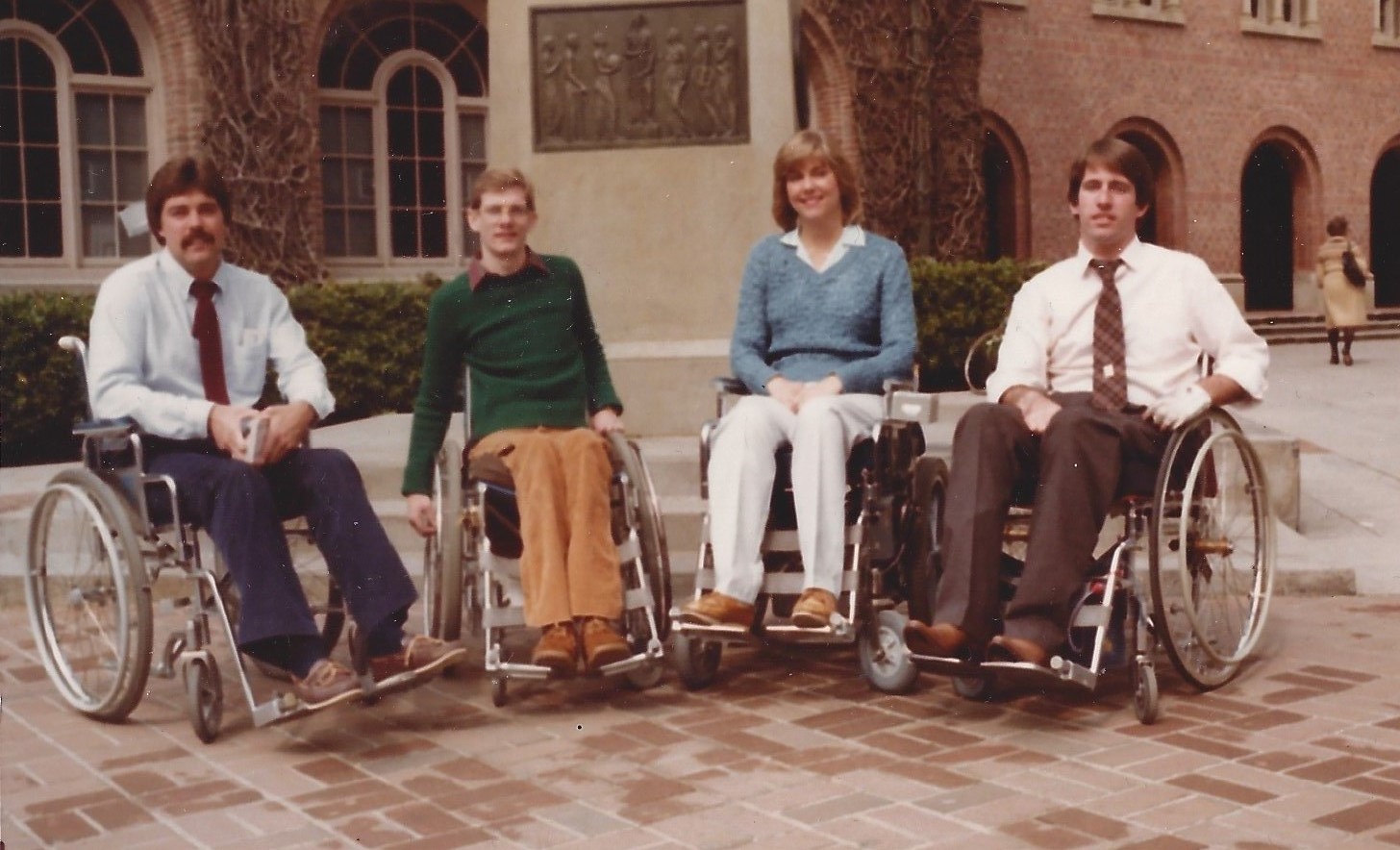 Swim With Mike’s third annual swim-a-thon debuts the McDonald’s Swim Stadium at USC in preparation for the 1984 Olympics in Los Angeles with 99 Olympians participating in the event. 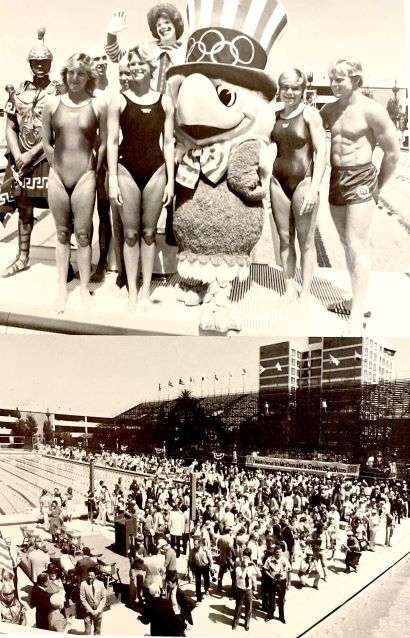 Tenth Swim With Mike Foundation recipient Jeff Keith becomes the first amputee to Run Across America, running 16 miles a day for 8 months from Boston to Marina Del Rey. At the finish line in Los Angeles, Mike greets Jeff with a Swim With Mike scholarship for graduate school. 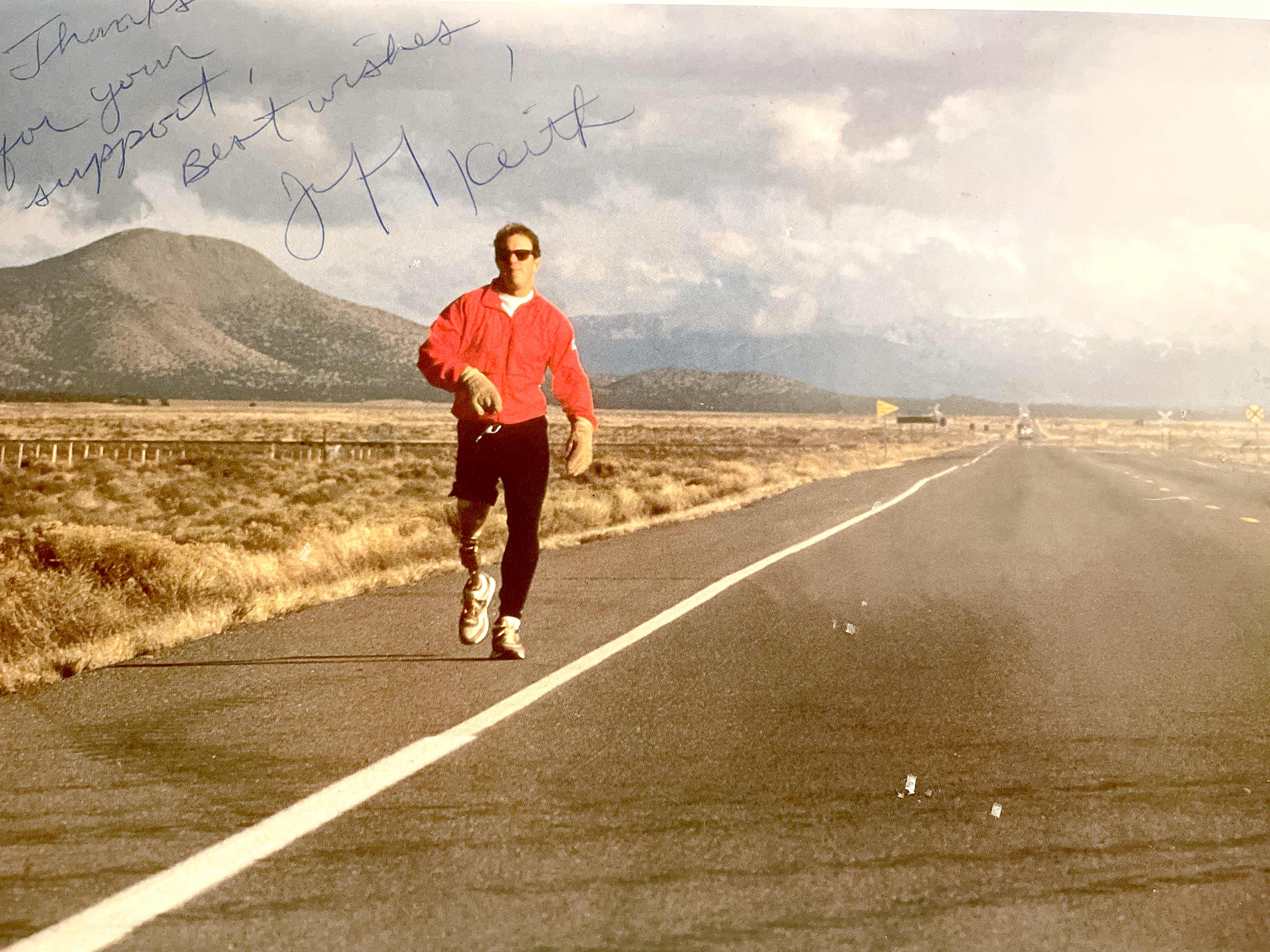 Marc Little is awarded a Swim with Mike scholarship after he is shot in the leg not far from the USC campus, losing his leg due to complications from the gunshot wound. Mentored by Ironman Jeff Keith, Marc continues his graduate studies thanks to the scholarship, later graduating from the Gould School of Law at USC in 1994. Former President Gerald Ford serves as Honorary Chairman of the event and swims with Mike. 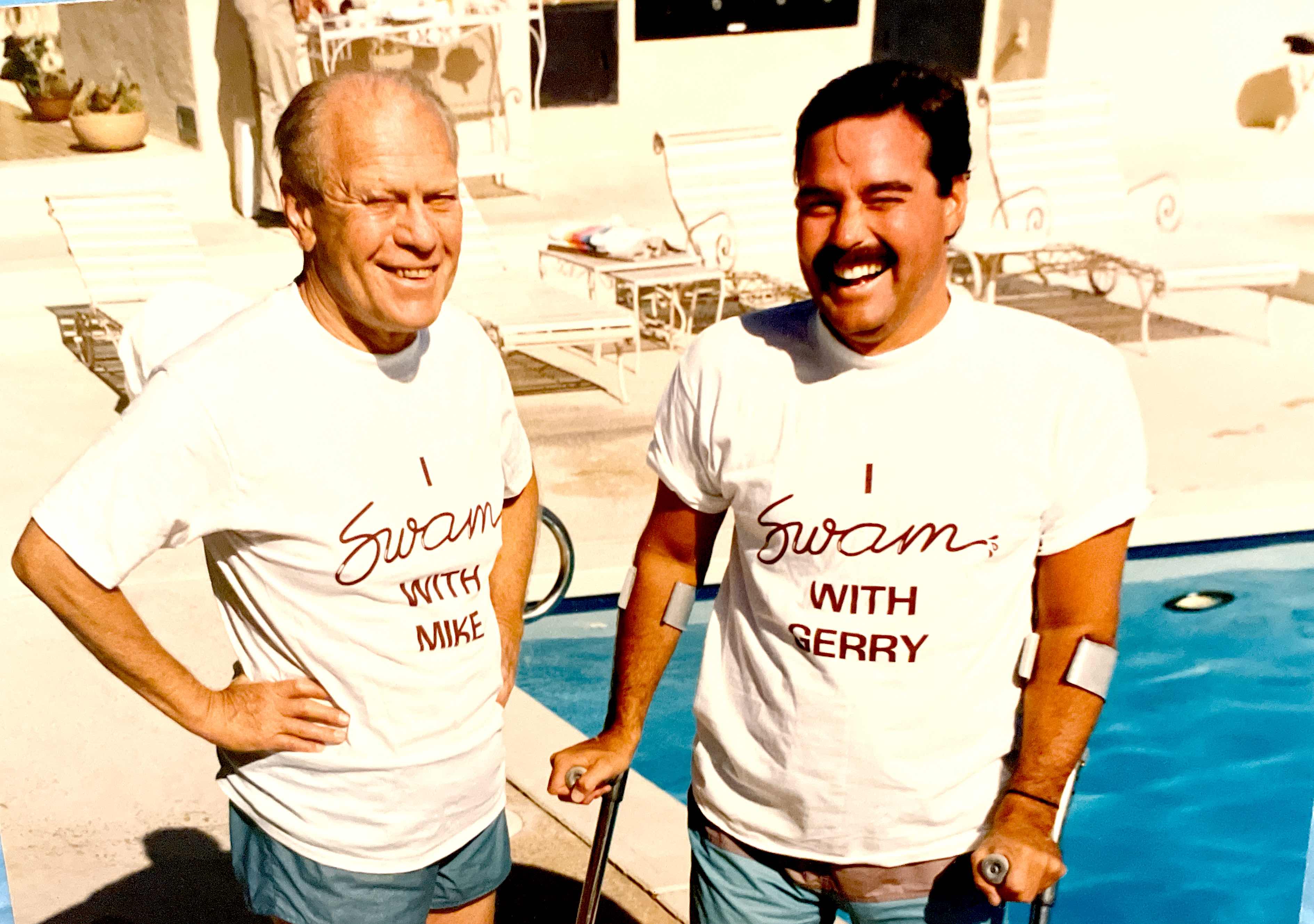 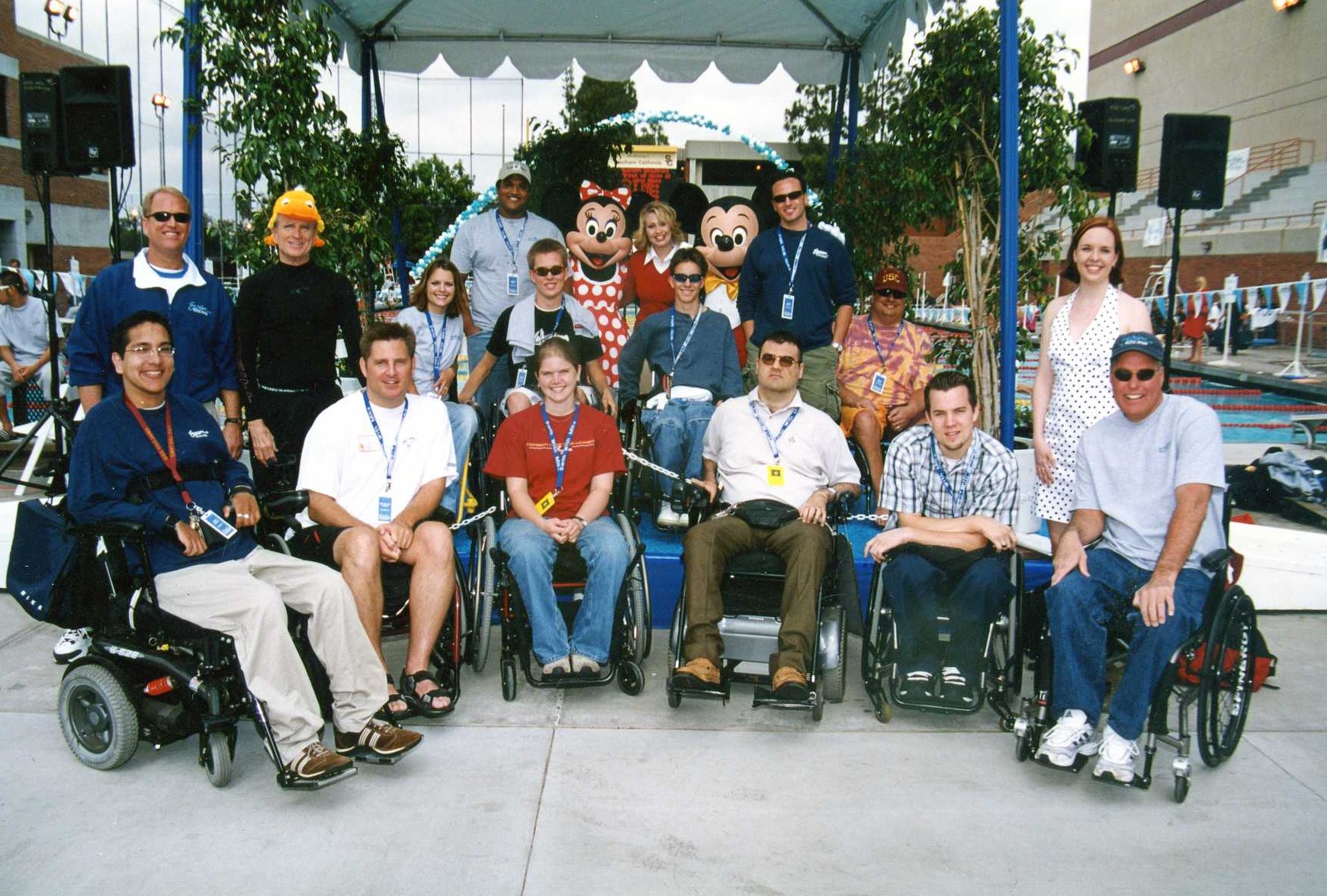 President Ronald Reagan, a former swimmer and lifeguard himself, recognizes the impact of Swim With Mike and makes a personal donation, meeting with Swim With Mike Co-Founders Mike and Ron. 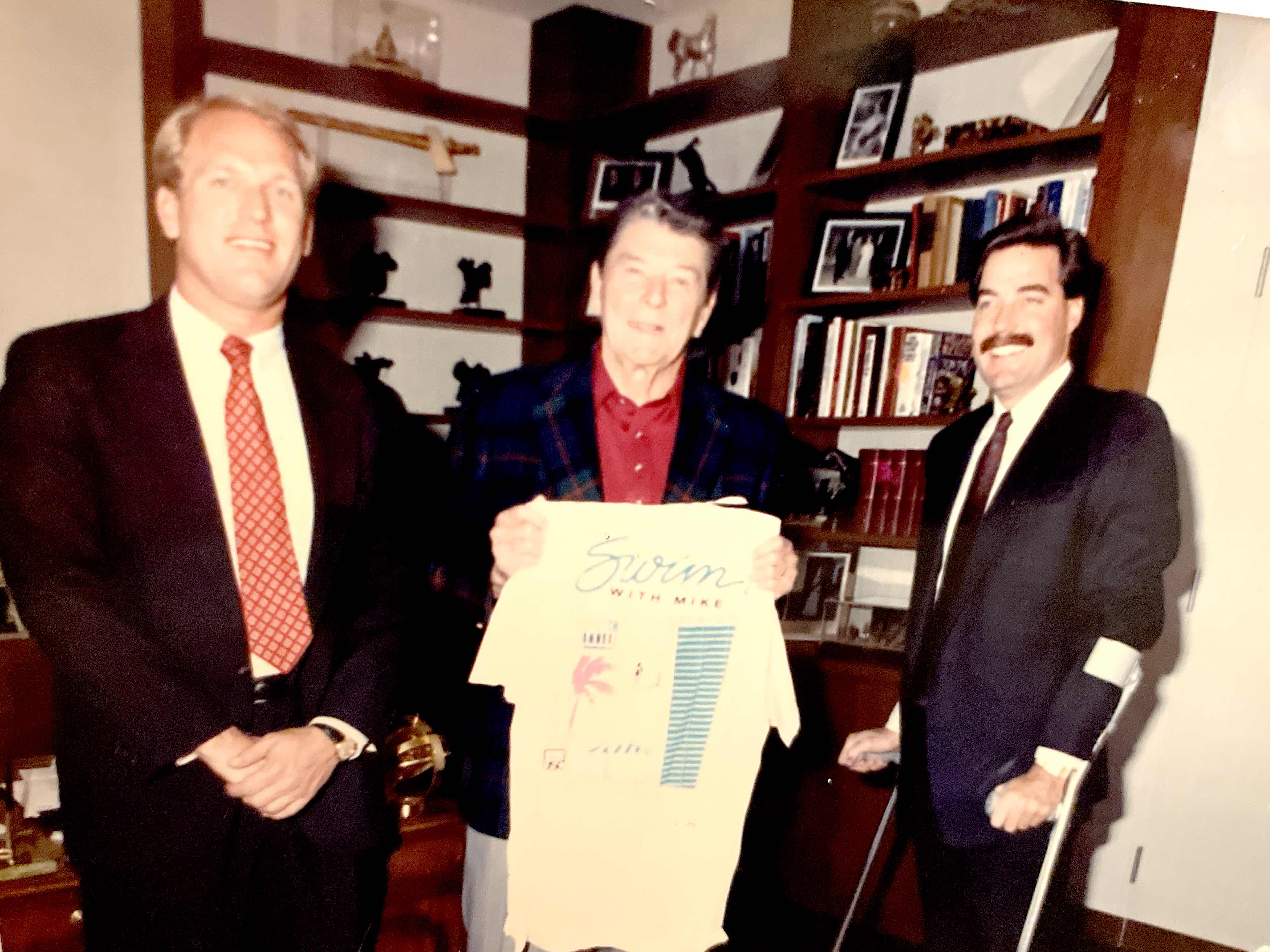 Celebration of the 10-year anniversary commences with $700,000 raised since 1981, providing 20 scholarships. Mike presents the 1991 People Helping People Award to Betty White in recognition of her commitment to philanthropy. 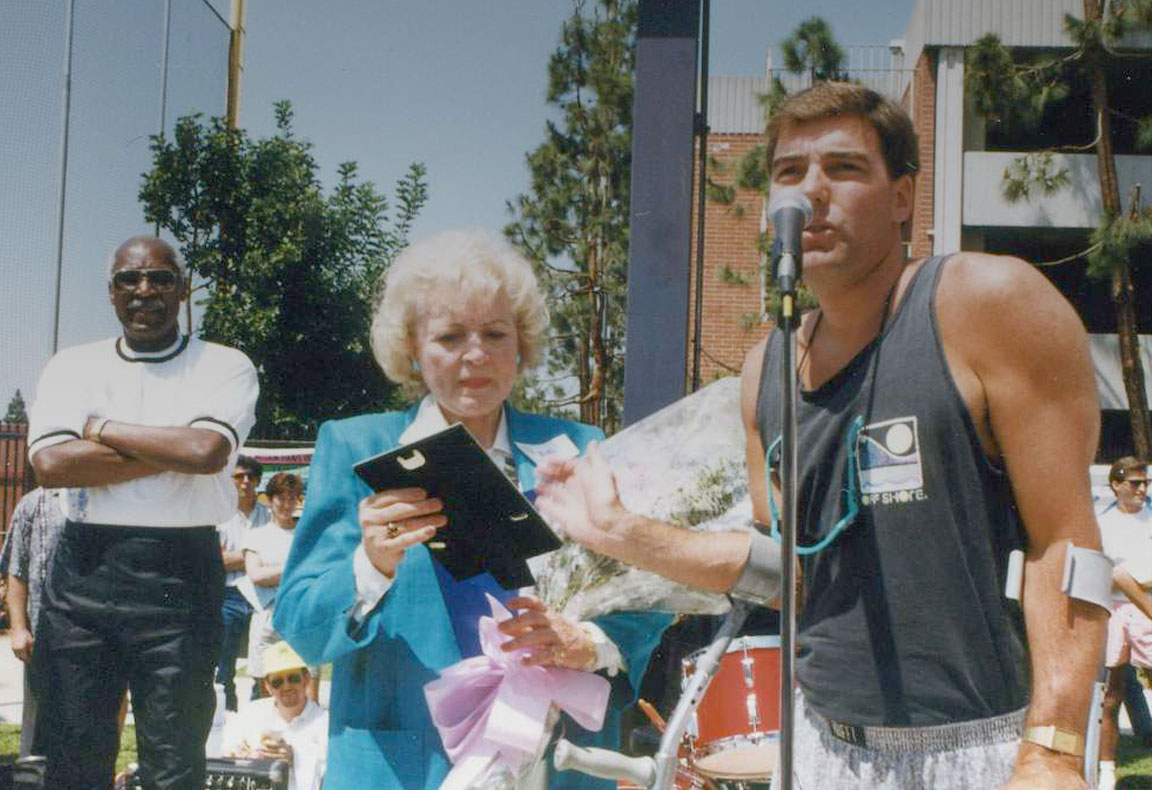 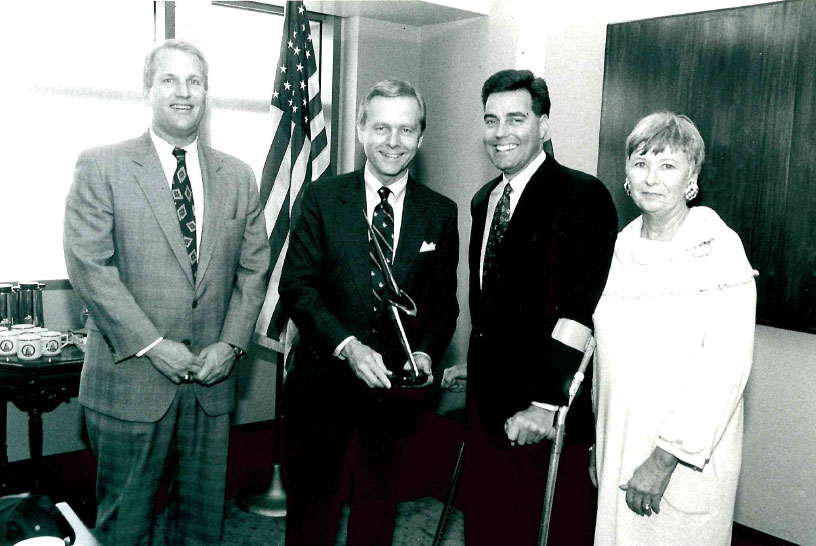 Sam Paneno is the first Swim with Mike scholarship recipient to attend a school outside of USC, completing his law degree at UC Davis School of Law. As a UC Davis running back, Sam dislocates his knee, and a severed artery results in the amputation of his lower leg.  Sam goes on to be a legal advocate for children with special education needs. At Swim With Mike, Former NFL and College Football Hall of Famer and Super Bowl Champion Lynn Swann is presented with the People Helping People Award. 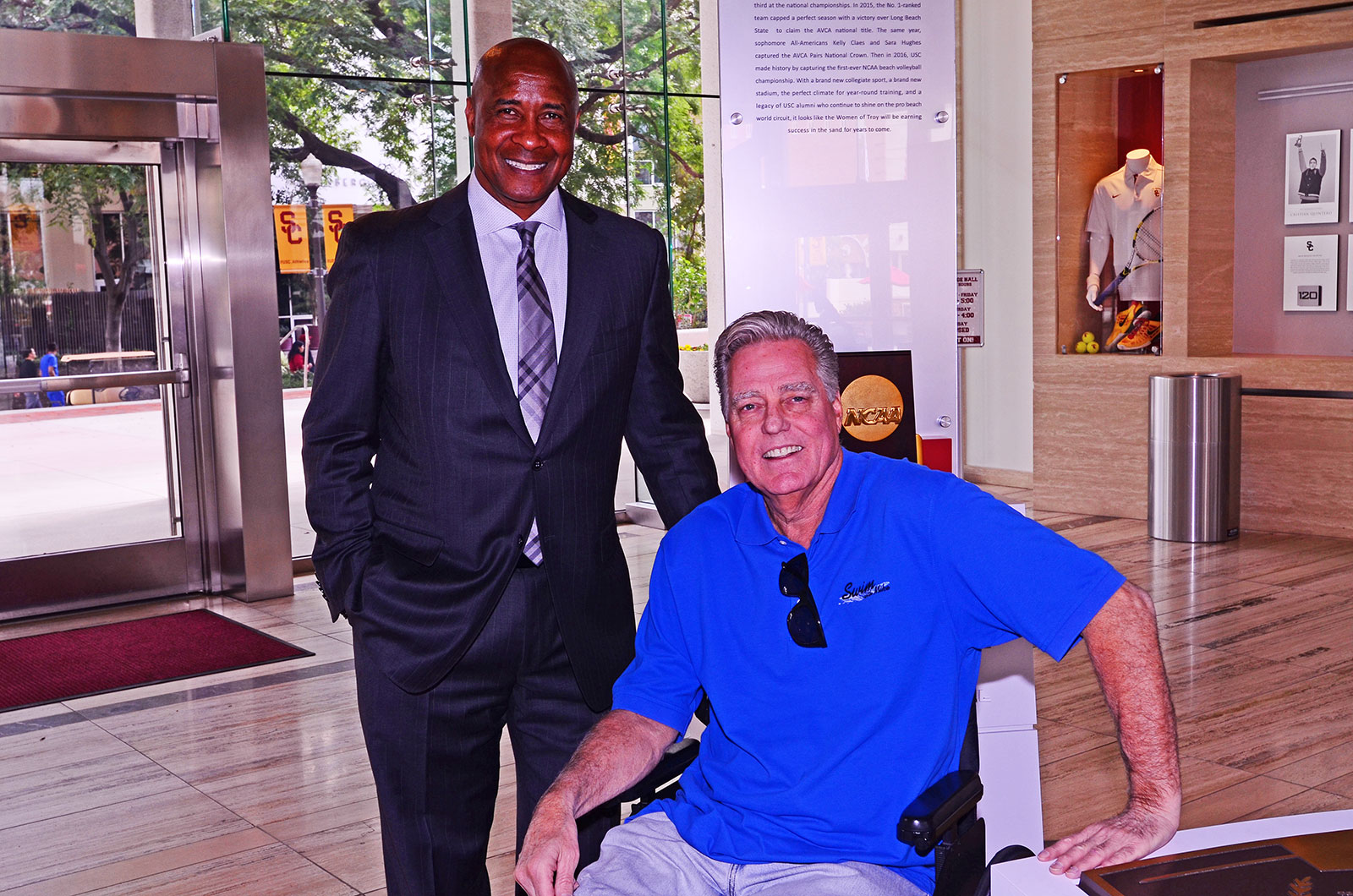 Rocky Paneno follows in his brother’s footsteps with a Swim With Mike scholarship, after falling six stories from a balcony in Florence, Italy, where he suffers multiple injuries and becomes a paraplegic. After overcoming tremendous roadblocks in rehabilitation and receiving a kidney transplant, Rocky goes on to complete his undergraduate and graduate degrees at USC, pursuing a career in education. 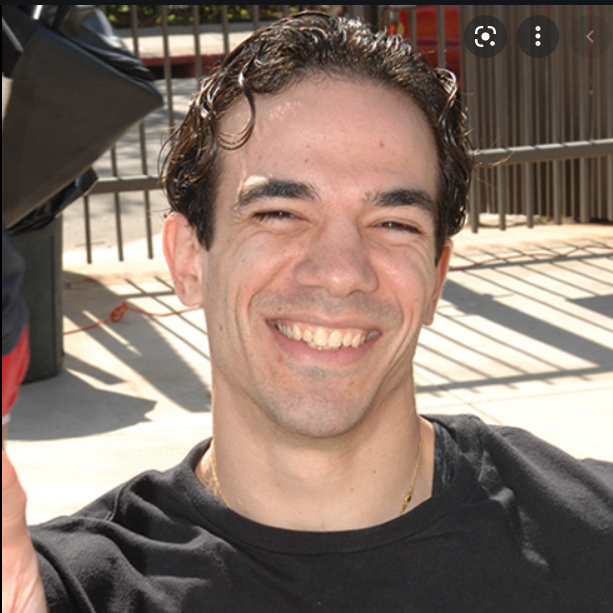 Swim With Mike celebrates 20 years with $3 million and 38 scholarships provided. 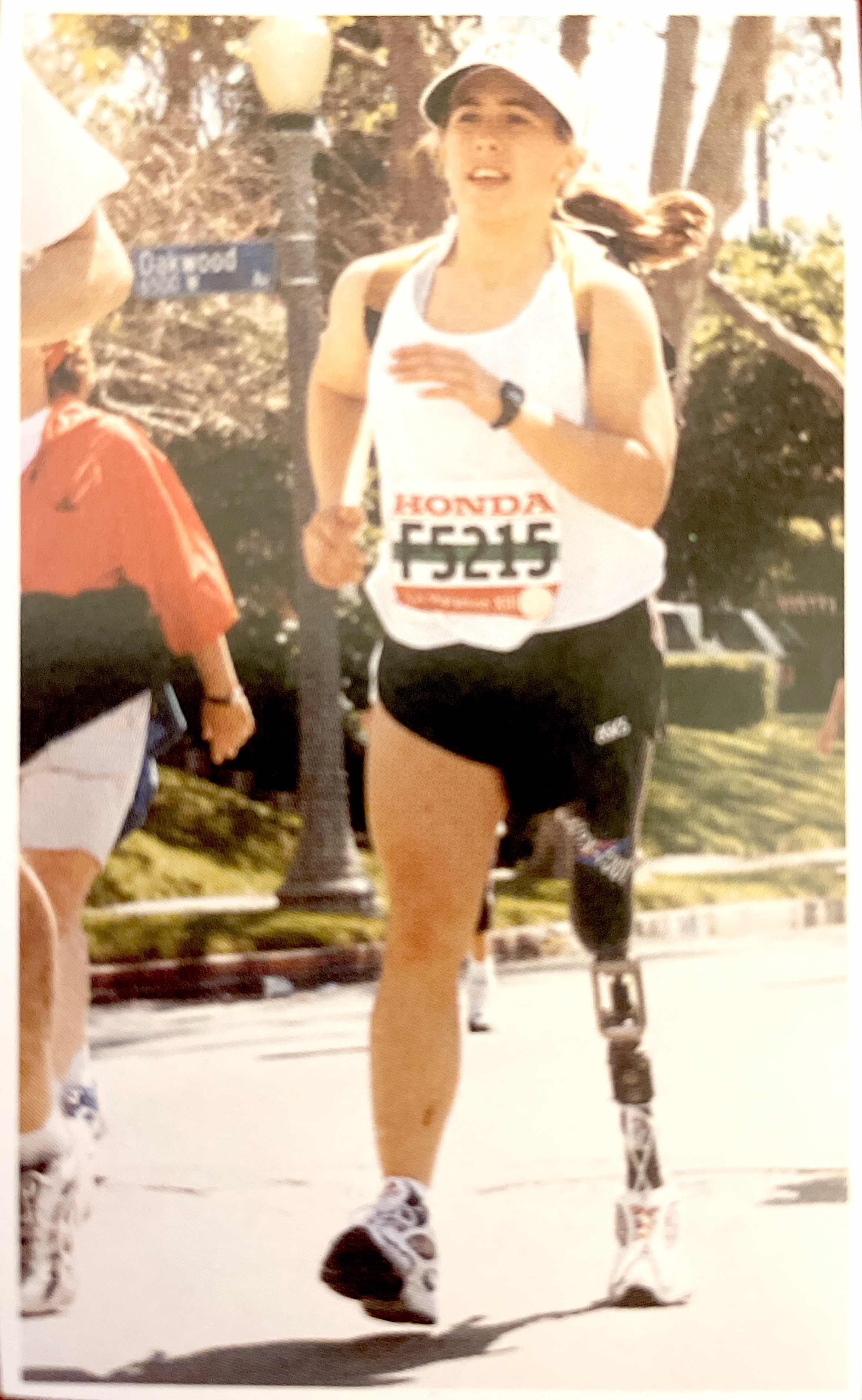 Swim With Mike raises more than $1 million, establishing a one-year high-water mark for the event. NFL Head Coach of the Seattle Seahawks Pete Carroll and comedian Will Ferrell compete in a relay to celebrate the milestone. 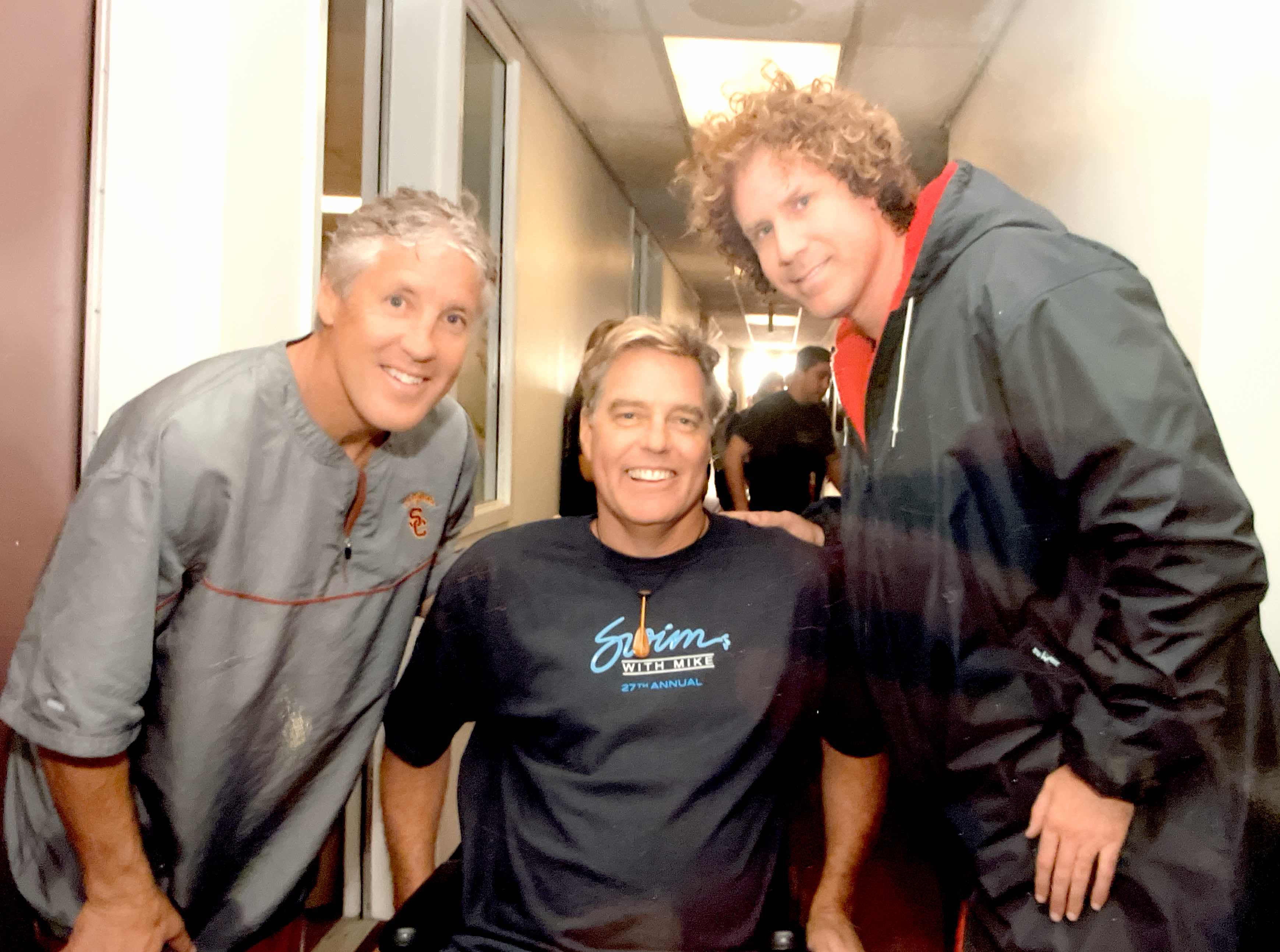 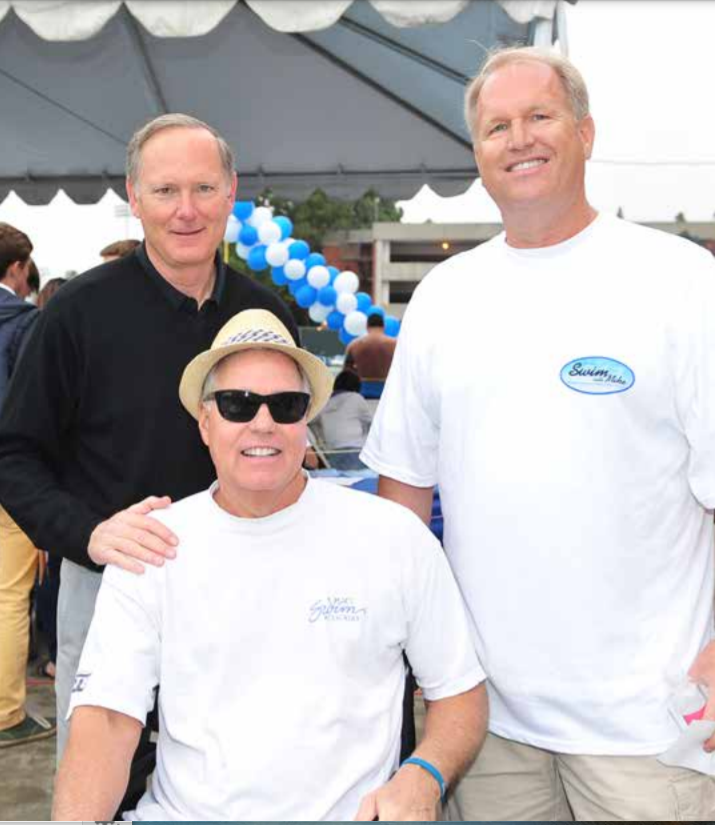 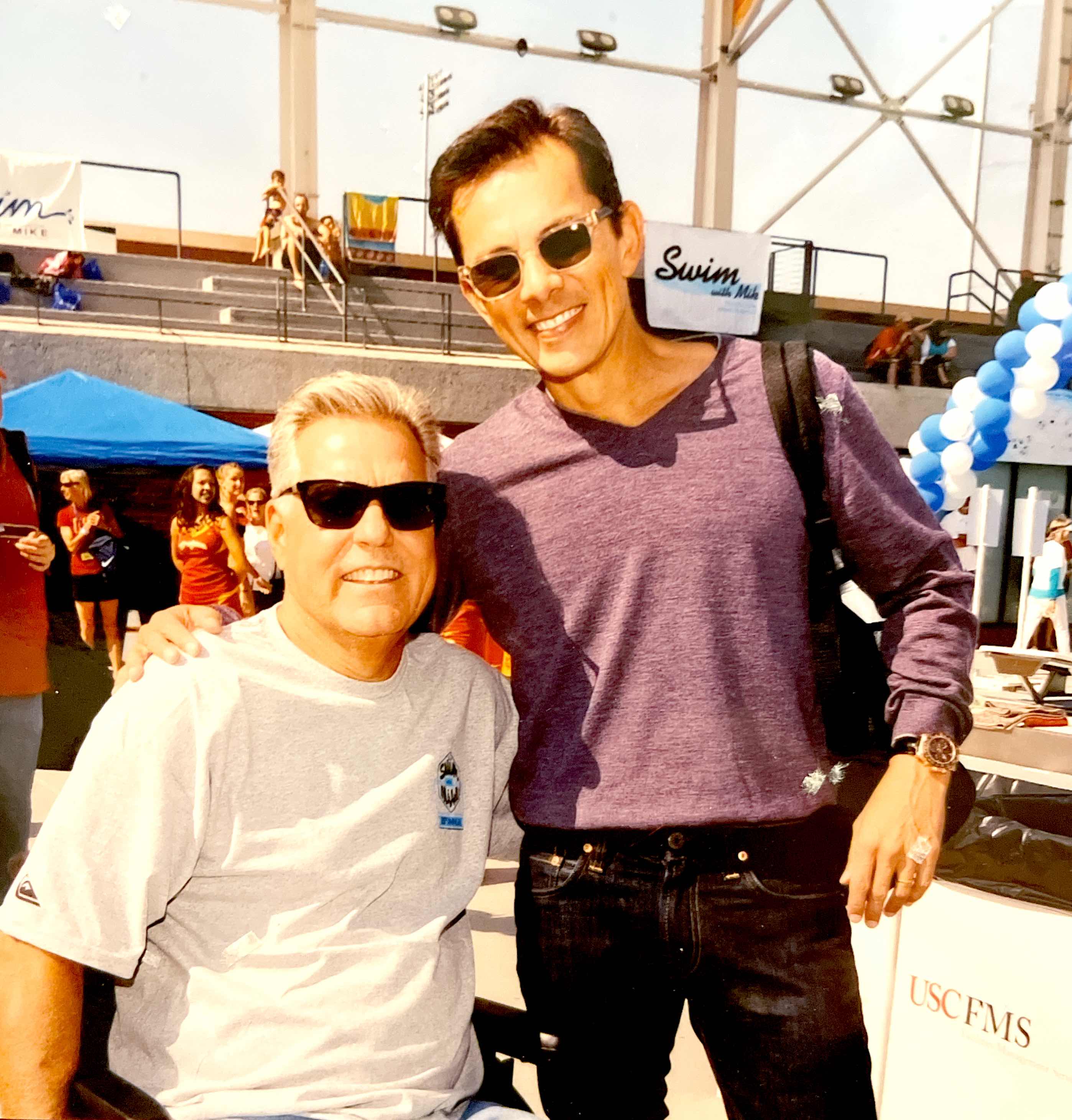 Jake Olsen is awarded a Swim With Mike scholarship. Jake is the first blind Division I football player, joining the Trojans as a walk-on long snapper, after he became blind at the age of 12 due to retinoblastoma. Before he lost his eye sight, he met with former USC Head Coach Pete Carroll and attended a USC football practice, with a dream of someday making the team. Jakes goes on to become a motivational speaker and author, and launch a tech start-up company. 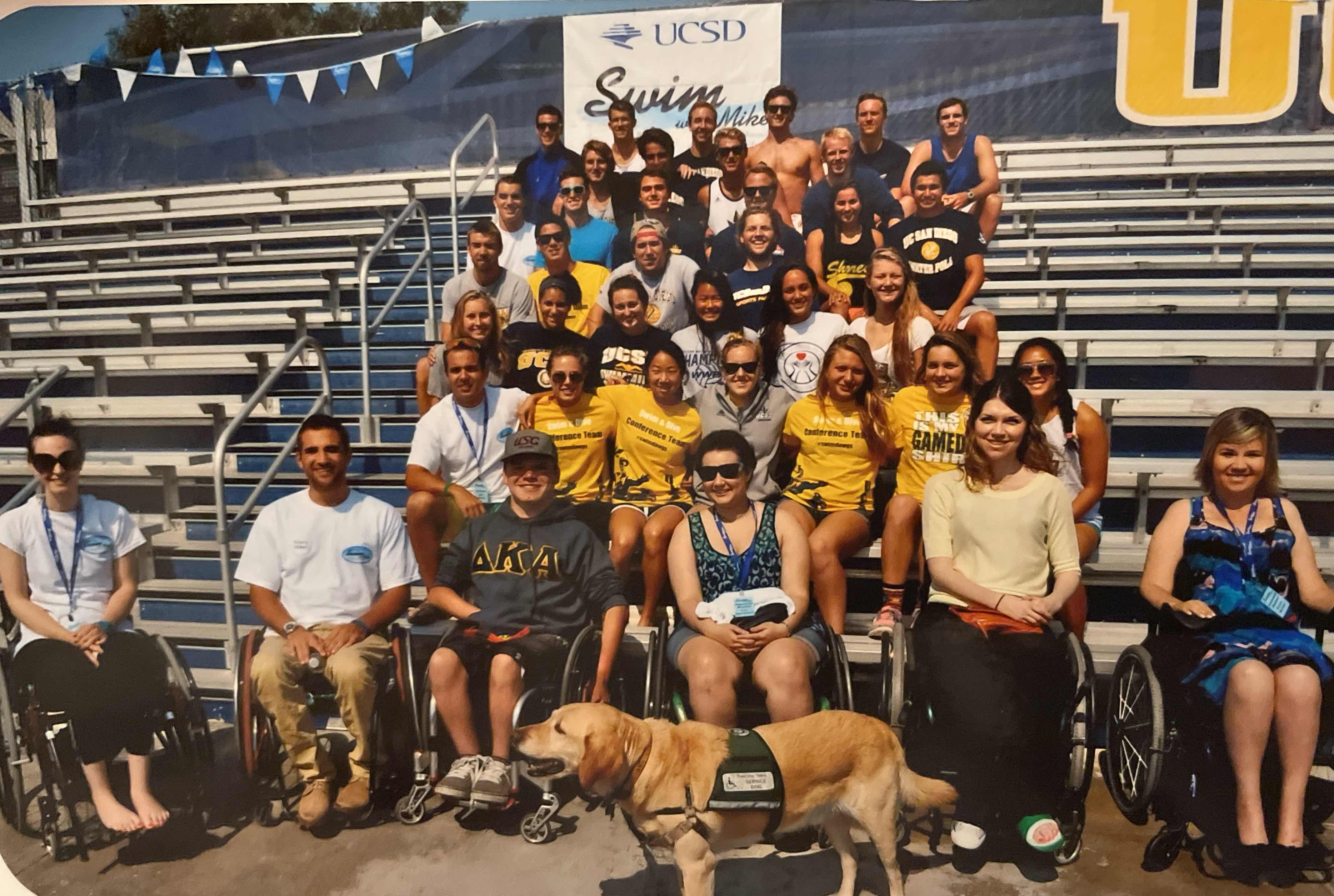 Swim With Mike celebrates 40 years of The Ripple Effect, changing lives for physically challenged athletes through the gift of education, raising $25 million and awarding 256 scholarships to recipients at 132 universities across the United States. 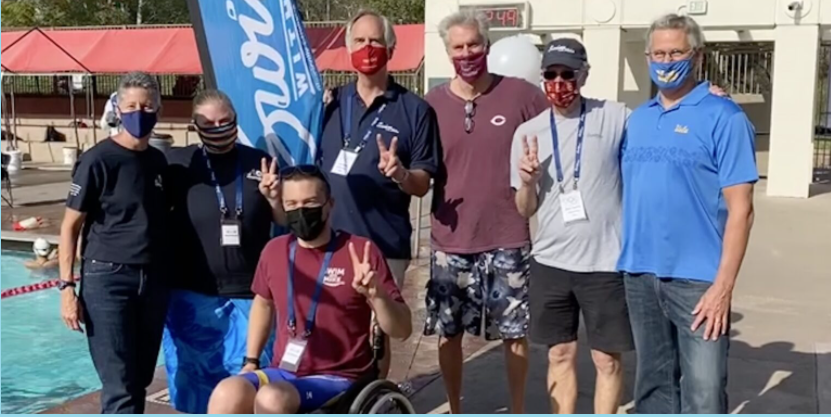 Swim With Mike Foundation launches as a nationwide foundation in partnership with Jersey Mike’s founder, Peter Cancro, pledging a historic gift of $1 million 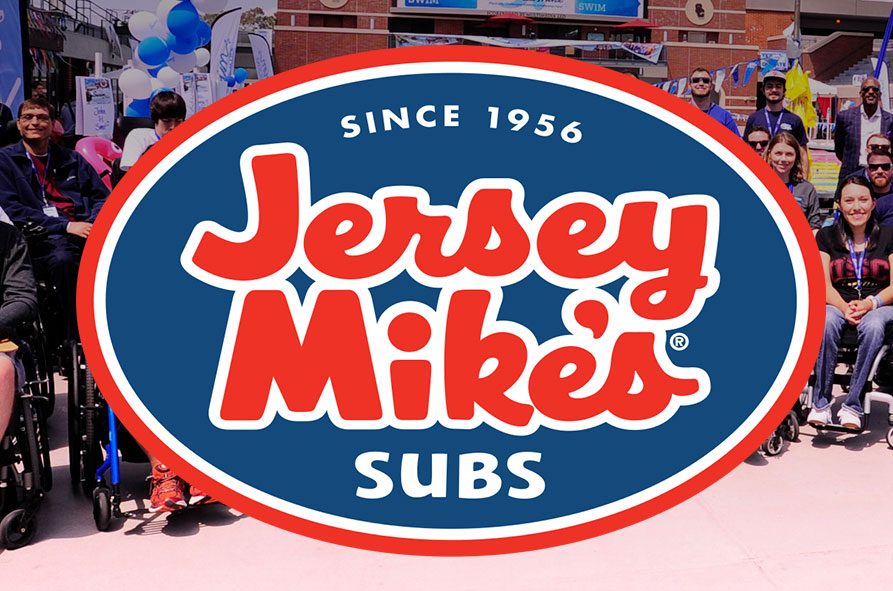