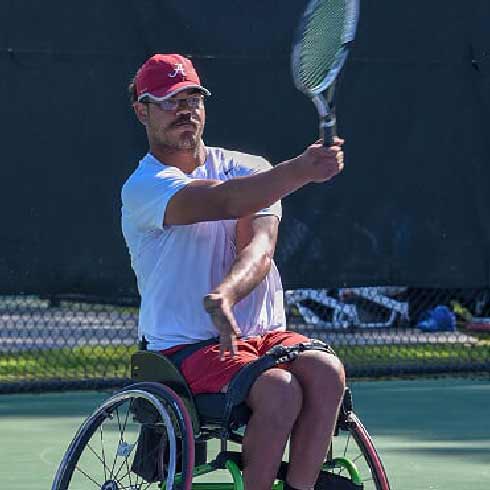 Jeremy grew up in Birmingham, Alabama and played baseball, football and wrestling. As his high school hosted one of the top football programs in the country that sport soon became a priority. The 6' 4" young man worked his way up to the varsity team and played for a year at Delta State. In 2013 he started working in construction and loved working with his hands, the people and the sense of accomplishment. All that ended when on the night of December 8, 2016, he was shot in an attempted robbery and the bullet clipped his L 3 vertebrae resulting in an incomplete spinal cord injury. After a month in the hospital, frustration and hopelessness were taking over. Upon his release, on a trip to the local farmers market he met two women who like him were in wheelchairs. They encouraged him to try wheelchair tennis at a local clinic and he was immediately hooked. He went on to attend the University of Alabama where he won a National Championship in his very first season. Jeremy joins class/teammate Thomas Venos as a member of the Swim With Mike Family.