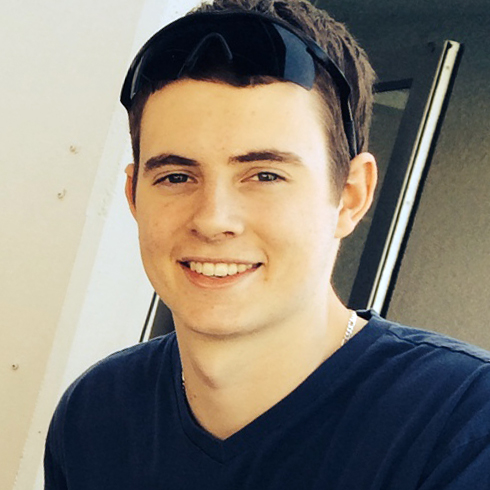 Nick was born on Maui and moved to Oceanside, California as a child. NiThere he fell in love with sports enjoying baseball, soccer, basketball, tennis, and snowboarding but his mom wouldn’t let him play football. After the family moved to Virginia Nick concentrated on baseball winning the 2012 Virginia State Championship while earning a 3.8-grade point average and National Honors Society accolades. Nick was just starting to receive recruiting calls from college coaches in the summer before his senior year when his family traveled to Maui on vacation. On the first day on Maui since his childhood, he dove into a wave and broke his C4-5 vertebrae on a sandbar. The next thing Nick knew he was laying on a hospital bed in the same hospital he was born in 17 years earlier. After months of healing and rehabilitation, Nick was able to return to school and graduate with his class walking with a walker across the stage to receive his diploma. Nick was in Washington D.C. visiting his grandparent on September 11, 2001 and saw the Pentagon after the attack. He knew then he wanted to give back to his country to make sure anything like 9/11 never happened again. This led to his desire to do study Global Affairs with a minor in Criminology and Intelligence Analysis at George Mason University. Nick also completed his J.D. at William and Mary in Spring 2021.