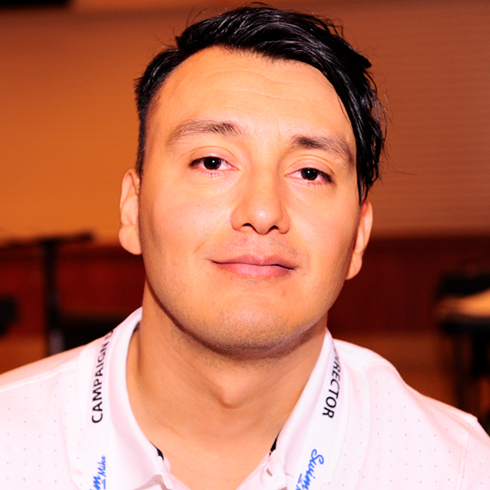 Santos was raised by a single mother of six in Tijuana, Mexico. Surrounded by poverty but with access to the most affluent country in the world, he learned early in life that achievement and success would come only through hard work. Along with his studies, he played baseball and soccer. Santos' interest in economic development led him to pursue a bachelor's degree in finance at Technologico de Monterrey. After graduation, he started working as a data analyst for Xerox in Monterrey, Mexico. Eleven months into his career Santo's plans changed when he was involved in an auto accident on January 28, 2012, which resulted in paralysis from the chest down. Since that day Santos' career has stalled as he worked diligently at rehabilitation which included physical therapy combined with participation in competitive sports. He has trained in Tijuana for wheelchair racing and joined a quad rugby club in San Diego. Santos is a member of the Tijuana Kiwanis club where he has served as treasurer. He is training for and hopes to compete in the Paralympics in the future.